Flying Reindeer and 'The Santa Phenomenon' - an update for 2019 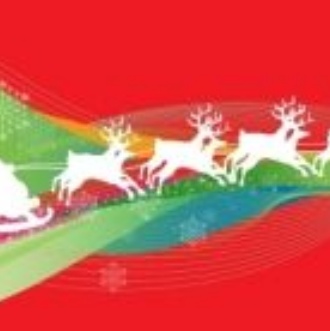 Those of you who follow the Newsletter will know that, as Christmas approaches, we ponder how it might be possible for Santa to make his deliveries across the whole world in a single night and with flying reindeer.

In 2017 we calculated precisely what Santa would have to achieve in the time given and found a possible answer in QUANTUM PHYSICS, in particular studying the implications of Heisenberg’s Uncertainty Principle and newly-published work on Macroscopic Quantum Phenomena. But this didn’t explain how Santa’s reindeer could fly. For this we needed to consider another relatively new concept, Fractal Vortex Shedding, which would explain how the reindeer could gain aerodynamic lift from their antlers. The problem with this is that there is no sign of any sort of propulsion system on the reindeer or Santa’s sleigh. However, in 2018 following some more newly-published research, we proposed that the reindeer themselves could be the propulsion system using a phenomenon known as Diametric Drive Acceleration which might even lead to them achieving a Hyper-Fast Warp Drive capability!

So what is new for 2019? In 2017 we explored the notion that, according to quantum physics, Santa and his reindeer could actually be everywhere at once – it is called ‘superposition’. Now, according to research published in the journal NATURE PHYSICS in September this year1, scientists in the Department of Physics at the University of Vienna have succeeded in a direct confirmation of QUANTUM SUPERPOSITION.

Superposition is one of the tenets of quantum physics. The idea involves an object being able to be in more than one “arrangement” or “configuration” at the same time. For example, if something could potentially be either “here” or “there” in the classical world, it can be both “here” and “there” at the same time in the quantum world, ie., something really can be everywhere at once and they seem to have proved it!

There is also a theory that exploitation of quantum superposition on a large scale could eventually lead to us being able to manipulate space-time2; put simply, we would be able to achieve time travel. Indeed, some theorists have proposed this as a means for Santa being able to accomplish his task in such a short time frame3. Although most consider time travel to be impossible, as any Douglas Adams’ fan will tell you it is merely improbable. So, perhaps it is simply the case that Santa and his reindeer have beaten us to it in the probability stakes!

1 QUANTUM SUPERPOSITION OF MOLECULES BEYOND 25 KDA

3 IS TIME TRAVEL POSSIBLE? (HOW DOES SANTA DO IT?)